Nestled near the corner of Navasota and Cotton streets in East Austin, the renovated John S. and Drucie R. Chase Building now serves as the new off-campus office of the Center for Community Engagement.

In 1952, this midcentury-style building was built following the designs of John Saunders Chase, the first licensed Black architect in Texas and the first Black graduate from UT’s School of Architecture. Holding a spot on the National Register of Historic Places, the Chase building at 1191 Navasota St. previously served as the Colored Teachers Association of Texas headquarters and a beauty salon called the House of Elegance.

UT purchased the 1,450-square-foot building in 2017. Nathan Goodman, an architect and the design services project manager at UT’s Project Management and Construction Services, and Dorothy Fojtik, the project manager, worked with others from this group to assess the site and design potential floor plans.

When Goodman and his team first visited the building, they found a poorly built parking lot, outdated plumbing, asbestos and other problems.

“It’s challenging to understand what shape the building was in when we inherited it,” Goodman says. “It’s hard to really appreciate the completion of construction and the final finishes and everything being installed if you didn’t have a reference of what it was before.”

Despite these challenges and budget issues, the Project Management and Construction Services team worked with Donna Carter, the president of Carter Design Associates, and the Division of Diversity and Community Engagement to transform the one-story building into a contemporary multipurpose space. Finished in August, the building boasts multiple conference rooms and ample outdoor space open to anyone from UT or Austin who wants to use the university’s resources to fight for change in their community. The Center for Community Engagement also maintains its on-campus office in the Student Services Building.

“I didn’t know anything about John Chase before I started the project,” Goodman says. “I’m glad that I had the opportunity to touch this project like I did and learn about him and be a part of not only expanding UT’s footprint in East Austin but helping to increase the number of people that will now hear about John Chase and understand John Chase a little bit more.”

The Chase legacy also continues elsewhere on campus; son Tony Chase, a Houston entrepreneur, law professor and civic leader, and wife Dina Alsowayel recently donated $1 million to the School of Architecture in honor of his father. The gift is designed to attract more people from underrepresented communities to the field.

While John Chase brought diversity into the architecture world, his wife, Drucie, an Austin native, assisted his work and served on cultural organizations such as the Houston Museum of African American Culture and the Emancipation Park Conservancy.

Fojtik says she enjoyed learning about Chase and his work during the renovation process.

“Our hope for the future is that others will know who John Chase is and take inspiration from that,” Fojtik wrote in an email. “He didn’t just blaze the trail. He dug it out with his own tools and left an indelible mark on this world. We are thankful to be a part of telling that story.”

Throughout the renovation, Goodman and Carter maintained the historical character of the building. At the ribbon-cutting ceremony in October 2021, Goodman showed Chase’s family the historical elements that they had preserved, including an indoor planter, the original front door — although repainted — and the logo from Chase’s architecture firm etched onto a glass door in one of the conference spaces.

“The event was great, and I think everybody really understood how much work was put into it, how much care was taken with integrating details,” Goodman says. “The most fun part was interacting with his family.”

In 2015, Suchitra Gururaj, the assistant vice president for community and economic engagement in the Division of Diversity and Community Engagement, started what would become “front porch gatherings,” informal settings where UT faculty and Austin community members discussed issues in Austin, such as health care inequities. Gururaj hopes these discussions will continue at the Chase building.

“The reason I love being in community engagement is that I am a higher education scholar and I appreciate thinking about ways that higher education can fulfill its public purposes to our communities,” Gururaj says. “We will call the Chase building, when we’re in there, the front porch of the university. It’s the first stop that community members can make to check in with the university. We will invite them in to be a part of the resources that we have, and we’re hoping that they’ll invite us over as well.

“UT is a big campus,” Gururaj says. “It can be intimidating for everybody, for community members, for students, for anybody who is a part of this university. Our job is to make the university much more accessible to our friends in the community and to create ongoing, lasting partnerships in the community that are two-way.”

By Jeremy Horne, courtesy of the Center for Community Engagement 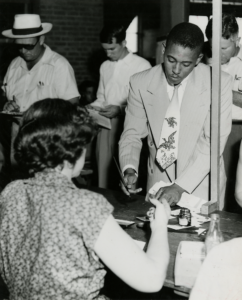 As a young boy born in Annapolis, Maryland, John Saunders Chase didn’t know exactly what he wanted to be, but he loved to create and design. In elementary school, Chase found the word he was looking for: “architect.”

After his graduation from Hampton University, Chase worked in Philadelphia, where he realized how few African American architects there were. He made his way to Austin to work with the Black-owned Lott Lumber Company. Chase desired further education to continue his architectural training, but at that time UT Austin was known not only for its distinguished architecture program but also for its segregation policies.

In 1946, Heman Sweatt had applied to UT’s School of Law but was automatically denied on the basis of race. Recognizing the same outcome would likely result if he applied, Chase went to the dean of the School of Architecture, Hugh McMath, and proposed a correspondence course. However, McMath encouraged Chase to wait and apply as the Sweatt v. Painter case was brought before the U.S. Supreme Court. Weeks later, the court ruled in favor of desegregating graduate and professional schools.

During his time as a Longhorn, Chase received hate mail and was shadowed by federal marshals. He was the only Black student in classes, and he was barred from social activities on campus and businesses on Guadalupe Street. Nevertheless, Chase persevered and became the first African American to graduate from the School of Architecture in 1952.

Architectural firms refused to hire a Black architect. Thus, Chase took matters into his own hands. He took the state examination, becoming the first Black licensed architect in Texas, and he founded his own firm in Houston. He hired minority engineers, architects and draftsmen and, with the help of his wife, Drucie, his firm expanded to approximately 50 employees in four cities.

Chase’s ties to Austin remained strong. In 1952, Chase was commissioned to design a building for the Colored Teachers State Association of Texas ¬— now renamed the John S. and Drucie R. Chase Building and restored by Donna Carter, the first licensed Black female architect in Austin.